Wetsuits are typically made from either Neoprene sponge rubber, or Polartec-type material, which does not contain sponge rubber. In Neoprene, the sponge is the middle layer, and the surface can be either skin textured (smooth "waterproof"-textured rubber), coated with a friction-reducing surface finish (such as SCS Nano), or laminated with fabric (nylon, polyester, fleece, and Kevlar are examples).

In the Elastomeric Industry (the companies that manufacture rubber for various uses), the technically correct term for closed cell sponge rubber is expanded rubber. The cells are like individual balloons, holding the gas and not allowing moisture to pass through as long as the cell wall has not burst. The chemical compound for expanded rubber may be the same as solid rubber (like O rings and gaskets). There are three types of rubber used in wetsuits: either Latex Natural Rubber (NR), synthetic rubber neoprene made from isobutylene (BR), and synthetic polychloroprene made from limestone/calcium carbonate (CR). The solid rubber compound is mixed with a "chemical blowing agent" to create the sponge cells. Under the heat and pressure of the forming process, this additive decomposes and mixes with the rubber compound and generates nitrogen or CO2 gas (depending on the compound used). As this reaction is occurring, the mixed batch is placed into an oven and allowed to expand into a bun whichich is then aged and sliced into sheets. These sheets are the basis of ALL modern neoprene wetsuits.

So what is open cell sponge rubber? In the Elastomeric Industry, it is expanded rubber designed specifically to be lightweight and rebound completely after compression. This type of sponge rubber is typically used for sound deadening or absorption, not wetsuits.

Some wetsuit companies use the term "closed cell" to refer only to a sponge that has been cured to have smooth skin inside and outside. Such suits are used primarily by competitive swimmers and free divers because it is believed the texture is more hydrodynamic. Some wetsuit companies have misused the term to differentiate their product from their competitors, claiming that their closed cell neoprene is non-porous (implying porous neoprene is bad). Let me say this about that… HORSE-FEATHERS!!

Porosity is the space between the cell walls that makes the structure of the sponge. If there was no porosity, there would be nothing but solid rubber, which would be a whole different material (hard rubber). Permeability connects pore spaces from one side to the other, allowing water to seep through the material. Permeability is created by constant deflection of closed cell sponge rubber. Bending, over-compression, or over-stretching of the closed cell sponge may cause the cell walls to burst. When a closed cell sponge has been over-compressed, the sponge may rebound very slowly or not completely, compromising the integrity and insulating ability of the material. The degree to which the material will rebound after a deflection and the percent to which the material will stretch without tearing the cell walls are properties that can be controlled when manufacturing the sponge rubber. These properties are discussed in ASTM D1056, ASTM D6576, and Mil-R-6130C. Companies that manufacture neoprene sponge rubber used in wetsuits offer different grades, reflecting differences in these properties and hence differences in application. The inside sponge and the outside surfaces all contribute to the wetsuit material's attributes, hence the attributes of the final wetsuit.

Which type of sponge is best? Generally, 100% Neoprene rubber has a greater capacity to withstand compression (maintains thickness under greater pressure). It is more likely to rebound to its original thickness after repeated or severe compression than the Neoprene-Butyl blend rubber. However, blended rubber generally has a greater capacity to stretch without tearing the cell walls than 100% Neoprene. Terrapin offers Glomex Neoprene-Butyl blend rubber and Yamamoto calcium carbonate-based CR Neoprene (made from limestone). Yamamoto says their rubber has a 23% higher close cell structure than petroleum-derived neoprene, making it more buoyant. It also has a maximum elongation of over 480%, whereas human skin stretches only up to about 60- 70%. 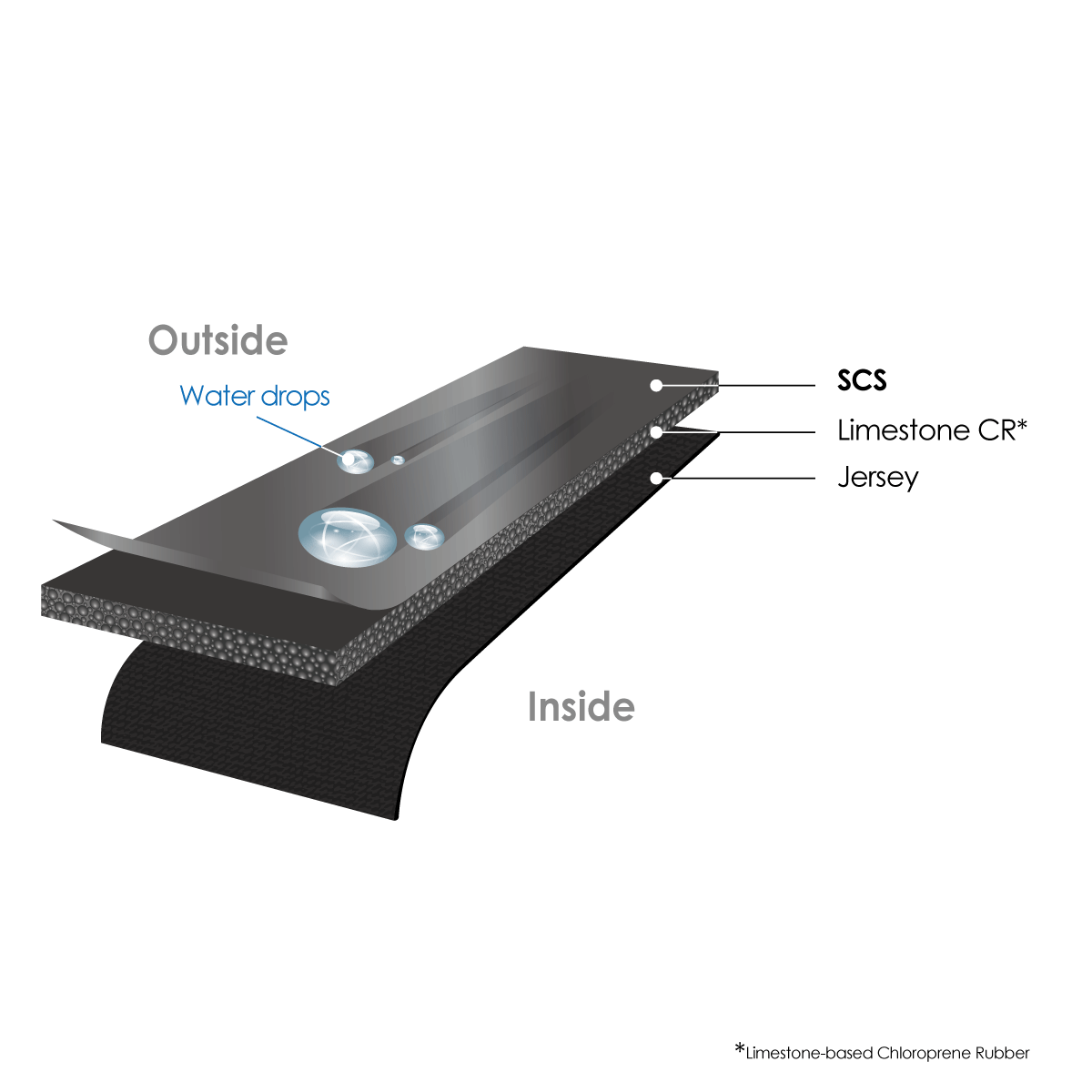 The sponge can be cured (a.k.a. melted) after slicing to get a smooth surface where all the bubbles are sealed. This makes an excellent surface seal against the body (like the neck and wrist seals on dry suits). But the skin finish is not resistant to abrasion, and it can't hold a stitch, only glue, so it is more vulnerable to tearing. Why is it popular today? This was the first finish available on the first wetsuits (remember Cousteau, Bond, and Nelson?), and retro is cool. Also, not coating or laminating fabric on the sponge saves $, so the wetsuit can be made more economically.

New technologies have produced coatings that can be sprayed onto the sliced sponge. These include the SCS Metal finish produced by Yamamoto Rubber and Glomex Rubber's equivalent (marketed under various names like Henderson's Gold finish, Harvey's Cobalt, etc.). This finish has a powdery slick feel when dry, allowing the material to slide easily over the body, and is hydrophilic (sticks to wet surfaces) when wet, reducing the ability of water to flow between it and the body. Because the smooth texture doesn't hold water, it dries faster than neoprene with a fabric surface. And it doesn't trap the body's skin cells like fabric can, so it is somewhat antimicrobial. But it also can be vulnerable to tearing and can (will) wear off with repeated rubbing. Some organic chemicals cause it to wear off faster (so it's best to avoid sunscreens and perfumes). Since these coatings first hit the retail market, manufacturing processes have improved, so the finish now lasts longer, but it can still wear off eventually.

Laminating fabric to the sliced sides of the sponge provides strength (resistance to tearing and abrasion), style (colors and patterns abound), and the ability to slide over the body (compared to the skin surface). Where wetsuits are stitched together, the fabric holds the stitches in place. Special fabrics can amplify specific attributes; for example, Kevlar, Kanoko, and Cordura are very abrasion resistant, Lycra nylon slides easily, and fleece holds water in place, providing better insulation it feels warmer. Titanium can be added to the laminating glue, which some manufacturers claim will reflect body heat to the wearer since metal conducts energy (heat, etc.) better than rubber or nitrogen; a strong argument can be made against the "reflection" theory. The greatest benefit of Titanium might be that it strengthens the laminating glue and may plug up the permeability of thinly sliced neoprene, such as 2 mm or thinner.  For a list of our available colors of fabric laminated on neoprene see our Neoprene Color Chart. Polartec is an engineered material composed of three layers: Lycra nylon on the outside, and nylon fleece on the inside, with a layer of polyurethane, sandwiched in-between. Polartec is a Malden Mills trade name. An equivalent product made in China is called Lavacore. This material contains no sponge rubber, so it is neutrally buoyant and can be worn by many people who are allergic to neoprene. It is about 2 mm thick, so it has more bulk than a dive skin but is slightly less insulating than 2 mm thick sponge neoprene (no trapped nitrogen bubbles). Polartec is usually worn in warm water or layered with another garment, where it can be an effective insulating layer. Dive skins and rash guards are typically made from Lycra, or other stretch nylon knit, and have NO insulating capacity. They protect from scratches and sun exposure in warm water. A dive skin worn under a wetsuit can make the wetsuit easier to get on and off.

Terrapin Wetsuits stocks Polartec material for repairs and new custom garments. We can sew Polartec with thin neoprene for a combination garment as well. For a list of available colors see our Polartec Color Chart.

Terrapin does not provide stock dive skin material. We are happy to make stitching repairs on your dive skin or rash guard, but for a new garment, we recommend the way-cool skins at www.DiveGoddess.com.

Polartec material has no sponge rubber, so it does not vary in thickness, and thickness measurements are not specified.

Neoprene thickness is measured in millimeters, but there is no industry standard as to how accurately it is measured or whether to include the thickness of only the closed-cell sponge or the whole sandwich of fabric laminate/sponge/fabric. The thicker the sponge in the middle, the more the wetsuit manufacturer pays for the neoprene, so there is some incentive to buy a 2.5 mm sponge and then call it a 3 mm wetsuit. Terrapin orders all our neoprene custom-made to our specifications, and we specify the thickness of the sponge layer. So a 3 mm Terrapin Wetsuit has sponge rubber that's 3.0 – 3.5 mm thick, not counting the fabric laminate.

The thickness that any given diver needs to stay warm underwater is based on a combination of factors, including water temperature, frequency of repetitive diving, typical dive duration and depth profile (remember neoprene compresses with depth), and body metabolism (as we age, our metabolism slows down and our extremities can get chilled quicker). Terrapin uses the highest quality neoprene and Polartec materials. To keep the color and resilience of your new wetsuit or another garment in top condition, we recommend you rinse in freshwater after each dive and air-dry it inside-out and out of direct sunlight. Do not expose your suit to heat; never put it in a clothes dryer. After your dive trip is over, or before storing the suit for an extended time, wash in a dilute solution of delicate hand-laundry detergent (we recommend PSI 500 or Sink-the-Stink brand wetsuit wash), then rinse thoroughly. Hang your suit on a wide-shouldered hanger (we recommend and sell Baker Ventilator hangers). Start the drying with the suit inside-out, and then turn it right-side-out after the inside is completely dry. Store suits hanging on wide hangers, rather than on little hangers or folded, to avoid permanent creases in the neoprene.

Polartec:
Do this before the first time you use Polartec material: Soak your Polartec garment in a non-reactive basin (not aluminum!) filled with a dissolved mixture of 1 C Kosher salt to 1 Gal cold water. Completely submerge the garment and let it soak for 2 hours, and this will help set the very intensely colored dyes. Rinse the garment in clear, cold water and hang right-side-out to dry on a wire hanger.